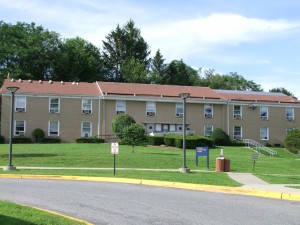 If you’ve been on Pace Law School’s campus recently, you may have noticed workers on the roof of E-House.

We are in the process of upgrading the E-House–home of the Pace Energy & Climate Center and the Pace Environmental Litigation Clinic–to create an energy efficient building. We are installing a new roof using standing seam metal which should last about 50 years. Other upgrades include adding insulation in the attic space, a new central AC system, a new boiler system, new thermal insulated windows and doors, awnings on the South side of the building, LED flat panels for lighting,  and the best part of the project, solar photovoltaic panels on the roof.

These solar panels convert the sun’s energy into electricity to be used during the day to run lighting, computers and anything else that uses electricity. The solar panels will produce about 20 Kilowatts of electricity or about 20% of the building’s usage during the year. The amount of electricity produced would be enough power to run 2 average sized homes for a year. When the project is completed, we will have a live web site showing the solar PV system and how much electricity is being produced every day.

This is Pace’s first large scale solar PV project. We are looking to expand these efforts to the Pleasantville and NYC campuses. The projects at the E-House have been supported through a grant from the NY State Economic Development Corp. This grant was part of a much larger renovation effort to the Schimmel Theater in the Pace Plaza building downtown over the past several years.