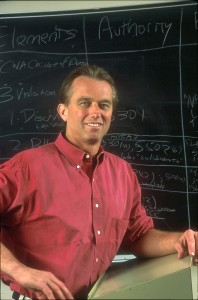 Prof. Robert F. Kennedy, Jr., co-director of the Pace Environmental Litigation Clinic, recently published a piece in the Huffington Post about the right wing’s attacks on any government support of clean energy.

The right wing’s campaign against the DOE’s support of renewable energy is not in our national interest. The DOE loan guarantee program has been extremely successful in providing debt financing to innovative energy projects in the wake of the 2008 credit market challenges. Access to capital is a crucial component of building innovative energy infrastructure and creating economic benefit. The DOE loan guarantee program has also been very successful at attracting private capital to these projects. Each dollar appropriated for the program leverages $13 dollars in private sector investment. As of August 2011, DOE had made commitments to 37 clean energy projects, leveraging private investment of more than $40 billion. This includes more than 10 utility-scale solar power projects in the Southwest, including SunPower’s Central Valley Solar Ranch and BrightSource’s Ivanpah. These projects are estimated to create tens of thousands of jobs across the country.

Kennedy points out that conservatives’ opposition to government subsidies for clean energy is “ironic” given its silence “regarding the hundreds of billions of dollars in annual subsidies and externalized costs flowing from government and the American public to the carbon and nuke companies that fund the right wing think tanks and the conservative blogosphere.” For example, he writes, “The same DOE loan guarantee program that supported the solar projects gave an astonishing $8.3 billion loan guarantee — many times the size of the solar projects — to Southern Company to build two nuclear power plants. Nuclear power is an industry with a product so expensive it cannot compete in any version of free market capitalism. Big nuke is totally dependent on massive, monstrous public and government subsidies at every stage of its life. Oil is a close second.”